I have never really documented my creative process before, so it’s about time I tried it. And the project I chose to show the steps of is a doozie. I am creating a 38″ x 72″ painting on canvas, which is roughly the size of me. I have painted on large canvases before, but it has been many years. The title of this painting is “The Return of the Jackelope.

As with all of my projects, I start off with thumbnail sketches in my sketchbook. I draw them with a .005 Micron Pigma pen. There is also a bit of wordlisting done with a sienna colored Micron (because I think it looks cool). In my thumbnails, I am trying to figure out the concept as well as the composition. I go a little bananas at this stage and even try to work out shadow and light.

I had a hard time figuring out the concept for this painting. The overall idea has been with me for at least four years now, since it was inspired by the time I lived in Castle Rock, CO. Colorado is a beautiful place with it’s forever mountains and marching foothills and rolling high plains deserts. Living outside of Denver though, I witnessed the ever-expanding suburban sprawl as it carved its way through the landscape. It would make me sick to see the hillsides and open land being flattened and paved over. At the same time, I was awed by the giant convoys of earth-moving vehicles stationed alongside these sites (hey, I was a tractor-loving boy once too). So, what would nature’s response to this destruction be? The return of the Jackelope!

I knew I wanted to paint the jackelope. Not the cute little fuzzy bunny with deer antlers, as it is usually depicted, but the grizzled jack rabbit of the American West, with the legs and horns of the pronghorn antelope. I see the jackelope as a shaman-like figure wrapped in Native American type dressings. I also wanted to paint the beautiful Colorado landscape and amazing sky. I had in mind the Georgia O’Keefe paintings of the cow skull on a post against the towering clouds. I liked the verticality of those images and the proportion of sky to ground. The third thing I knew I wanted to include was one of the giant earth moving tractors. I took about fifty photos of them. 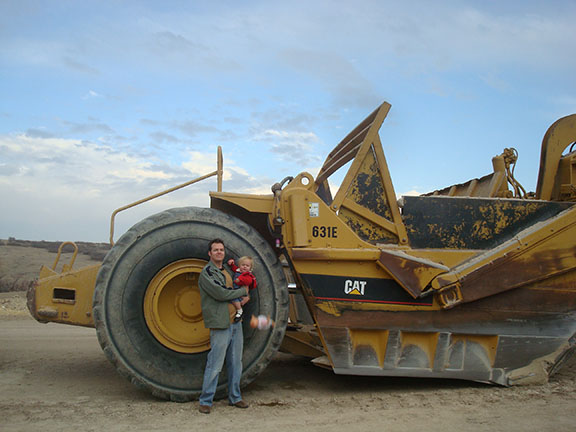 At first, the conflict I was going to create was going to be between the Jackelope and the tractors. But after several thumbnails, I realized there isn’t a lot of drama to be created with a rabbit creature facing off with an inanimate object. I tried the tractor as a rotting carcass with crows descending upon its rusting hulk. But that made the Jackelope victorious and I wanted to show the face-off. So I injected a human boy into it. A boy with a white cowboy outfit on, pulling the tractor. Leaving a trail of destruction behind him. This figure has appeared in other art I have done. He represents the young and naive but destructive force that mankind is on this ancient planet. The final thumbnail ended up looking like this: 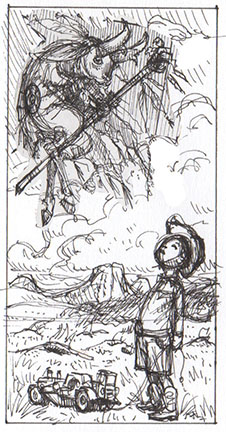 I created a tight pencil sketch based on this thumbnail, which I will share in the next post.

6 thoughts on “Return of the Jackelope – Step 1 – Thumbnails”